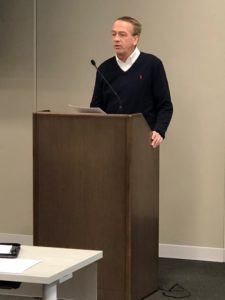 It floods in the Town of Bloomsburg.  A lot.

Since 1972, the Susquehanna River has exceeded the flood crest stage of 19 feet 14 different times.

Hurricane Agnes in 1972 was devastating.  It caused tens of millions of dollars in damage to the Bloomsburg area and affected thousands of residents of the area.  It shut down businesses and dramatically affected people’s lives.

The January 1996 flood did more damage.  Occurring in the middle of winter after a thaw and a lot of precipitation, I still remember the continually rising waters and the ice chunks floating down from New York and northeastern Pennsylvania.  The flood stage of 19 feet was met and exceeded and reached 26.76 feet again causing damage and destruction in the Bloomsburg area.

In 1996, the Pennsylvania General Assembly had a special legislative session to address the January 1996 storm.  Several bills were passed and signed into law including a Capital Budget bill that included monies for the Town of Bloomsburg for flood protection.  That line item would serve as a starting point for the state share of the Flood Control Project that was recently completed to protect Autoneum and the 700 jobs there.

Tropical Storm Lee and Hurricane Irene caused the Susquehanna River to crest at 32.75 feet which bested the historical 1904 flood when the river crested at 32.70 feet.  The 1904 flood was a winter one that took out numerous bridges along the Susquehanna River from Berwick to Catawissa, with the ice chunks destroying the wooden bridges.  People died, hundreds of businesses were disrupted for weeks and sometimes months, and thousands of residents were displaced.

The 2011 flood was devastating as well.  Homes swept off their foundations, airplanes swept up and tossed around, schools closed, sewage and water plants inoperable, and hundreds of residents left with flood waters and mud and muck.  My legislative office was flooded and for close to 11 weeks we operated out of temporary quarters till we could return around December 1st.

I am thankful to President Obama and Congress for sending funding to Pennsylvania in 2012 and 2013 through the CDBG-DR program.  And I am aware that a significant amount of these funds were to be used in those 5 counties that had the most devastating damage with Columbia County being one of those counties.  Bloomsburg is located in Columbia County.

In late 2011 and early 2012, a good number of individuals, businesses and municipalities took advantage of FEMA and PEMA monies and programs to get back in their homes and to restore services.  A number of buyouts of homes did occur in multiple areas.

But CDBG-DR funding remains.  I am aware of the efforts over the past year or two to direct these monies towards raising and elevating homes and other projects.  These types of programs have been widely advertised and our legislative office has helped with that.  But time has passed, and years have passed, and the demand is just not there anymore.

For a long time, the Town of Bloomsburg has been the largest community along the Susquehanna River without any significant flood protection system.

However, after 2011, I was able to help obtain state monies from the Commonwealth Financing Authority to help to build flood protection around Kawneer in Bloomsburg to protect hundreds of good paying jobs that would otherwise have left the area.  That flood projection project is complete and this large business is protected.

More recently, capital budget monies from the Commonwealth along with federal EDA funds and private sources were used to build a significant flood wall around Autoneum in order to protect over 700 very good paying jobs there.  So this international business that has been in this location for over 100 years is now protected.

I believe that these Substantial Amendments will redirect valuable funds away from programs where the demand is just not there and to projects that will dramatically affect in a positive way the communities devastated by the 2011 natural disaster.

Using CDBG-DR monies to extend the now-existing limited flood wall in Bloomsburg to protect public schools, water and sewage infrastructure, and over 100 residences will dramatically reduce the devastating effect of future flooding that will certainly occur again in this area.

Over the years, DCED has worked alongside HUD to determine the best use of these important funds.  At this point, the very best way to allocate a substantial amount of the remaining monies is toward an extension of the now-existing flood wall that will provide permanent protection to a significant amount of property for a long time.

In my legislative district is the City of Sunbury.  A flood wall was built there in the 1950’s to protect the city where the West Branch and the Susquehanna River come together.  As a result of that flood wall, this large city was protected from the floods of 1972 and 1996 and 2011.  A large city and little, to no, damage.  Therefore, that flood protection has saved hundreds of millions of dollars of damage over that 60 plus years.